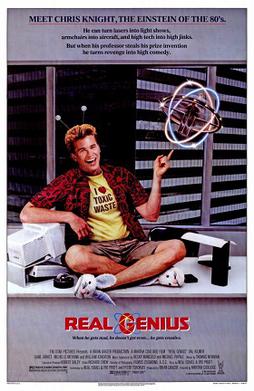 The CIA is determined to create a new “peace time” weapon, codename Crossbow, that uses a high-powered laser to eliminate potential threats before they become terrorists.  To do so they recruit the help of a well-know college professor to create the laser needed to pull off this accomplishment.

Meanwhile, 15-year-old Mitch is accepted to the college for mid-winter term due to his insane intellect.  Rooming with genius and role model, Chris Knight, proves to be vastly different from the idea that Mitch builds up in his head.  Knight is a bit of a prankster and overall chill guy compared to tightly wound genius Mitch.

As the pair find their differences and turn them into strengths to help each other through the difficult final semester for Knight, they work to create an incredibly powerful laser that will be Knight’s ticket to graduation.

Such a great comedy and one of my top watched movies of all time.  It is a staple in my vocabulary to quote lines from this film.  And there are plenty of them that are quotable.

I love the story, the quirky characters and the fact that, though the science is incredibly above my head as I know nothing about optics, everything discussed is relatable.  It isn’t about the science.  You don’t have to know anything to love this film.

Witty and sarcastic this whole movie is an absolute gem of late ‘80s comedy.   From the child genius on a college campus (and in a dorm!) to the fact that the bad guy is someone in the faculty…its just an overall ridiculous film that is just as funny after the first watch as the 100th.  Plus, it has a great soundtrack.

One thought on “Real Genius, created by Neal Israel and Pat Proft: a film Review”