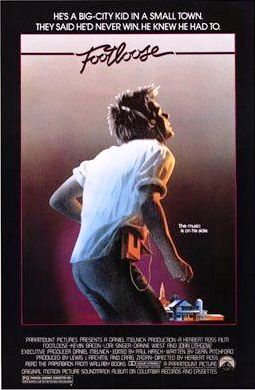 New guy in town, Ren MacCormack and his mom, have just arrived from big city Chicago to live with Ren’s Aunt and Uncle.  While attending Sunday church services he meets the Reverend Shaw Moore and his wife Vi and daughter Ariel, who seems sweet and docile but is actually incredibly reckless.

When at school Ren befriends Willard and discovers that the town has a dancing ban that extends to all rock music within the borders.  A few kids got killed in a car wreck a few years earlier and the whole town blamed the music, the books…the dancing…for the whole wreck and the subsequent deaths it caused.

As Ren and Willard become closer friends and Ren starts to befriend Ariel and her friend group he decides to show them the joy of dance by taking them out.

This subsequently encourages all of them to stand up to the elder generation of the town and petition for a school dance- THE PROM.  Its just within their reach…or so they think.

I love this movie.  It’s a really interesting study of what happens when you are too strict with your kids. Its also one of my go-to movies for sleepovers.

There isn’t anything wrong with music, or books that challenge your current way of thinking, or dancing…so long as you aren’t hurting anyone.

There will always be accidents and bad choices but the more you restrict your child the worse its gonna be.

But this film also does a lot of what a teen film should do.  Showcase hard to talk about issues so that you can open up the dialogue with your kids.  Here there is the chance to talk about domestic abuse, drugs and drinking, teen sex, verbal and mental abuse….

But its also just an awesome film with a fantastic soundtrack that just sets the tone for the whole thing.

One thought on “Footloose (1984), created by Dean Pitchford: a Film Review”