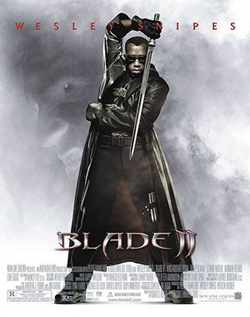 Two years have passed since Blade defeated Deacon Frost and his plot to rule the vampire world.  As his search for his mentor Abraham Whistler continues, Blade discovers that Whistler is no longer human…but a vampire after having not killed himself upon infection.

Meanwhile a pandemic has hit the vampires.  A new “Reaper” virus is turning normal vampires into primal, ravenous, and mutated creatures with terrible effects to their consciousnesses. Because fo this the vampire overlord sends two of his minions to strike a deal with Blade, the newly cured Whistler, and Scud (Blade’s new sidekick). As the trio is drawn into the underbelly of the vampiric world, they are required to assist a pack of highly trained vampires who were meant to hunt Blade himself.

When the nightclub they are investigating is overrun with Reapers the pack discovers that not only are the infected vampires ravenous but they are also immune to basically everything that kills a normal vampire.  As member after member faces these animals it is more difficult for Blade to figure out just where this disease came from.

-Creator: Based on characters from the MARVEL Comics

-Where to Watch: Amazon Prime Video (Buy/Rent), iTunes (Buy/Rent), DVD, Blu-Ray, or look for it at your local library

This was just an incredible film.  I absolutely loved it.  But I also love films that are bloody and gory (yay horror films).  The introduction of a disease that is decimating the vampires is fascinating and a great trigger for Blade to begin to infiltrate the underbelly of his enemy.

I LOVED Nyssa as a character and was really upset that she died.  While it would have been interesting for her to end up as a love interest for Blade, he doesn’t really feel like the kind of character who needs or wants this kind of relationship.  I would have loved to just see her as a new partner for him.  They worked really well together and made a good team.

The dynamic of the pack was beautifully done and while we don’t get a ton of screen time with most of them the directed body language and overall comraderie amongst the pack is great.  You can see the relationships within minutes of meeting them.  Who was in charge.  Who was a couple.  You basically get to read the group the way Blade did.  And that is great directing.

I wish for the third movie to be as good as the first two but based off of the reviews I read this is the best of the three with the first coming in a close second…and the third…is a movie, I guess…

Well, onto the next film but this one will be entering my general rotation of films when all of this is over.

One thought on “Blade II, based on characters from the MARVEL Comics: a Film Review”