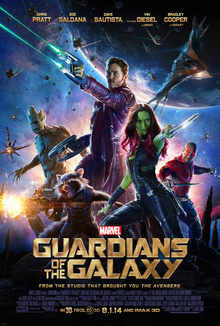 The year is 1988 and a young Peter Quill is privy to his mother’s death after a long fight with cancer.  When he runs from the hospital room he is abducted from Earth by the Ravagers, a group of alien smugglers led by Yondu Udonta.

Twenty-six years later Quill is attacked when he attempts to steal a strange orb from a planet.  The Kree fighters are followers of the fanatic Ronan the Accuser, who is known for his association with Thanos.  When Quill escapes the team and leaves with the orb Ronan sends Gamora, daughter of Thanos and a renown assassin, to hunt him down and obtain the object.

Unbeknownst to both Thanos and Ronan, Gamora is ready to betray them all, to get away from the prison that she has been trapped in since her adoptive father ripped her away from her home planet and her parents.  When she begrudgingly joins forces with Quill, a genetically and cybernetically enhanced racoon called Rocket, and a humanoid tree-creature Groot they end up at the beginning of one of the greatest (and possibly last) adventure of their lives.

What happens along the way could be anyone’s guess…they can only hope it doesn’t end in their deaths.

-Creator: created by Marvel Cinematic Studios, based on characters created by Dan Abnett and Andy Lanning

THIS is how you introduce a group of characters that most mainstream people don’t know!

I knew basically nothing about the Guardians of the Galaxy before these films.  They weren’t the comics that were in my house, and I never really thought to pick them up myself.

When the first few songs of the soundtrack hit and you get the first few interactions with the cocky Quill it just set the stage for what is to come.  I know that the Guardians (like so many other superhero groups such as Green Lantern Corp or The Defenders or even The Avengers) have interchanging and ever-changing members.  It’s a way to keep the team fresh and, if someone were to die or retire, is much easier to get a new member with very little question.

But I am so glad they chose this particular group of Guardians.  They work well together.  They balance each other.  They are a little off center and crazy but in ways that make the others seem a bit more together.

That paired with some great writing, excellent introduction to characters and stories most are unfamiliar with, and the killer awesome soundtrack was a great foot to start these movies with.

Definitely worth the watch!