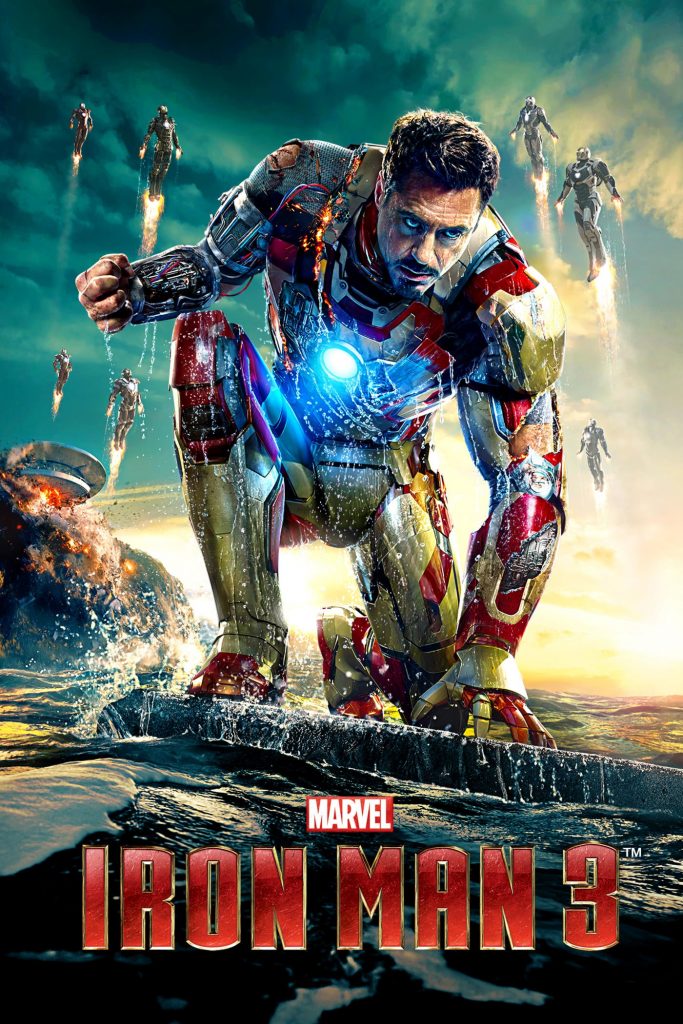 Seven months after the battle of New York against Loki and his alien army Tony Stark is suffering from PTSD and major anxiety/panic attacks.  Due to this restlessness he is struggling with insomnia and this is causing issues with his girlfriend, Pepper Potts.

As the world begins to settle from the attack in New York a string of bombings caused by a new terrorist named The Mandarin start to occur.  The attacks are incredibly baffling to law enforcement and other intelligence agencies due to a near total lack of forensic evidence.  Happy Hogan, Stark’s loyal security chief, is injured in one of the attacks.  Due to this, Stark issues a bold threat… his address on international television and a challenge to The Mandarin himself.  Come and get me.

When his home is attacked, he and Pepper are nearly killed, the Iron Man suit saving her life.  Tony manages to escape in one of his prototype suits to hunt down The Mandarin himself.  Little does he know that a scientist from his past is about to resurface…and along with him a myriad of other problems…

-Creator: created by MARVEL Cinematic Studios, based on characters created by Stan Lee

-Page of Reference in RP1: MARVEL is referenced throughout the book

I think the whole crew did a great job with this movie.

Downing depicted his PTSD and anxiety attacks like a pro.  They are real and visceral and occur at times when it seems illogical or plain bad timing.  Which is exactly what happens in real life when you suffer from these things.  Attacks like that and having your PTSD triggered is really damaging to your life and the relationships you are in.

Mandarin, the terrorist, being a façade is a great little twist too.  When I first saw the movie I hadn’t even though of that as a possibility but it does really make you think about the depth of that “face” you see on the news.  If that is really the person behind what is going on in the world.  And what gives a terrorist true power…the person in charge or the people who follow them

The ending is quite poetic as well.  With him giving up the suits and his ARC Reactor. And finding Tiny…because Tiny is the best.  It doesn’t change that Tony is Iron Man.  It just means that he ready for balance in his life.  Which is what we get to see in later movies with Iron Man in them.

Lots of conflicts and a lot to unpack about Tony’s life and journey along with the morality of what goes on with the Extremis treatment (and how it goes down in the comics is a whole other issue to unpack).  Overall I like this movie a lot of everything that wen into all of that.

Its great how they formatted the whole film with Tony himself telling the story.  It’s a nice little touch that he was actually telling it all to poor Bruce Banner who was asleep….poor guy.  He’s not that kind of doctor.