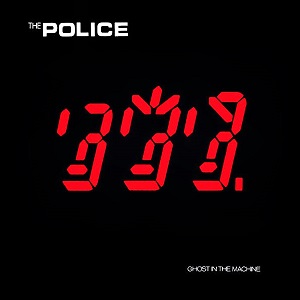 -Album Title: Ghost in the Machine

Even though I knew some of the songs on the earlier albums this one and Zenyatta Mondatta have some of the songs I recognize the most.  Spirits in the Material World and Every Little Thing She Does Is Magic are some of my favorites with One World (Not Three), Rehumanize Yourself, and Demolition Man are all songs that I know well.

I think these songs as well as the notable songs on Zenyatta Mondatta have the essential sound that I know so well as The Police.  While the Raggae Rock sound of the other songs on their albums is really apparent it is these songs that really create the solid “Police” sound that most people know.

Once again…the other songs on the album are fine…but its these big songs, the singles, the popular ones that are the songs that dictated the rating on this album in my opinion.