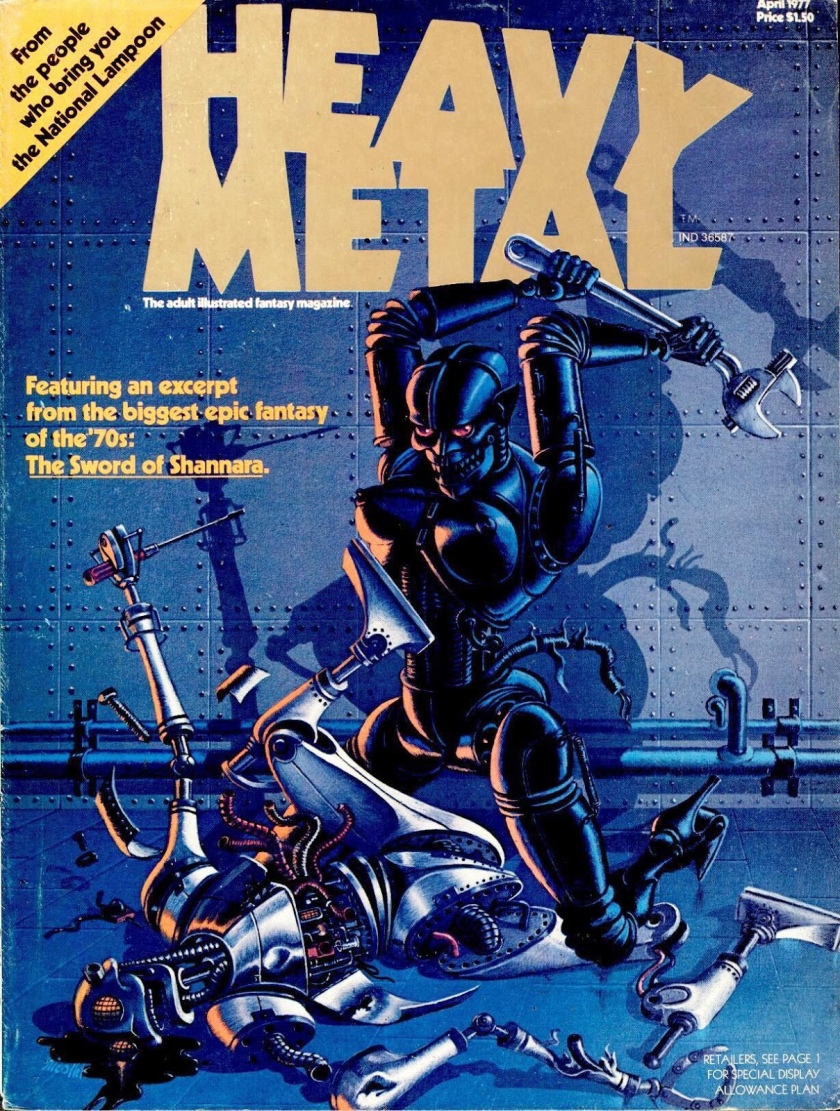 Heavy Metal magazine is mentioned pretty early on in Ready Player One (page 82) and I knew I would be hard pressed to get a hold of any issues let alone all of them to read through so here is a little overview of what this magazine was all about.

Started in 1977, Heavy Metal is a science-fiction and fantasy based collection of comics and stories that was released monthly. Unlike the comic books of the time that were regulated by the Comics Code Authority, Heavy Metal allowed for adult and explicit content within its pages.

The magazine was originally an official licensed American version of the Parisian magazine Metal Hurlant which featured the same things that Heavy Metal continues to publish to this day. American audiences weren’t used to the more European pieces of art and the underground comix (small satirical and self published comics common in Europe). This became a way to introduce America to a variety of different media that they would t otherwise see on the news stands.

But it was definitely meant for adults. Often featuring explicit imagery and cartoons, Heavy Metal became known for its bright full-color and glossy pages filled with photography, comics and short stories which spawned two feature films one that followed various storylines from several issues connected by one theme and a second that was its own story.

There are also several video games based on the magazine and they now own their own podcast network! Every other week you can find the latest episode of Heavy Metal Magazine: The Podcast and well as the full production podcast WonderWerk wherever you listen to podcasts. Both feature stories from Heavy Metal magazines along with lots of fan based hilarity and passion.

There are a lot of other podcasts as well that the network hosts including Pumpkin Spice Podcast (a comedy horror podcast), Putting the Science in Science Fiction (explore the line where science and science-fiction collide with hosts Heavy Metal CEO Matthew Medney, aerospace engineer John Connelly, and Benjamin Dickow of Columbia Space Center talk to experts on the subject), and even The TV Show Show (all about pop culture and tv!).

I think it is amazing that Heavy Metal is still around today. It really bridges the gap of what is considered comic, art, or explicit content. The meshing of a lot of those things is what makes a lot of people really think. Plus a good science-fiction based comic is always good in my book.

Featuring different artists, styles, stories and media there is most likely something for everyone in the pages… but makes sure you are 18+ before venturing into the pages of this awesome and slightly trippy magazine or anything that is based on its content.

We here at Gunters, Games, and Gold are not responsible for anyone consuming content they are not ready for.

If you want to listen to Heavy Metal: the Podcast or WonderWerk or any of the other podcasts on the Heavy Metal Podcast Network we recommend listening on Spotify or wherever you get your podcasts!

Sources for our information above:

Heavy Metal Article on Wikipedia (yes we do look at Wikipedia and it’s linked sources!)