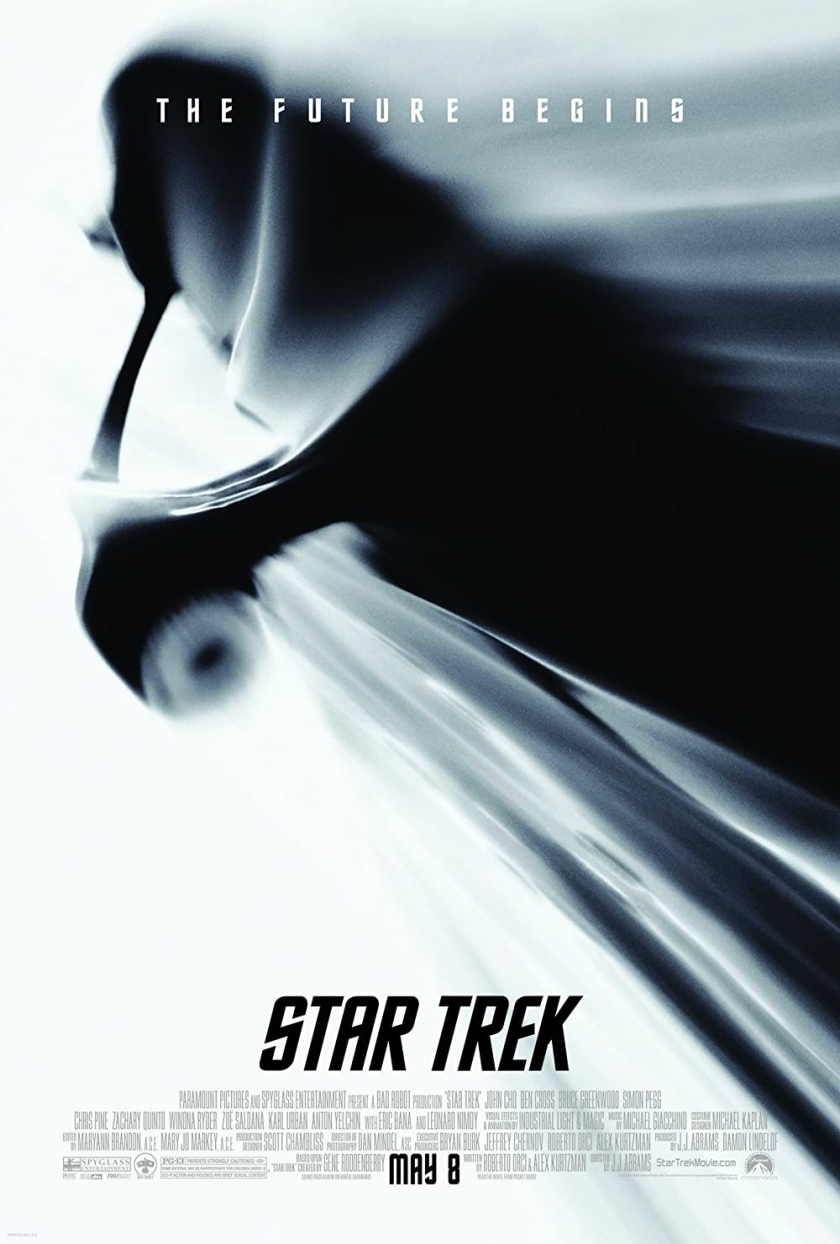 In the 23rd century the USS Kelvin is out exploring the uncharted regions of space when they are confronted by a strange space vessel coming from a black hole. During the skirmish that follows the federation ship is lost along with its acting captain as he saved all other living souls on board including his newborn son, James T. Kirk.  The strange ship is not seen again.

On Vulcan, the young hybrid Spock begins to find his place amongst his people only to find that even being the top of his class is not enough to erase his heritage.  He chooses to enroll in StarFleet Academy instead.

It is here that the pair become entangled and set off on their first mission under Captain Christopher Pike as the Fleet gets called to the aid of Vulcan following unprecedented and sudden seismic activity on the planet surface.  As the current USS Enterprise sets off on its maiden voyage the plot thickens when they arrive at Vulcan to find the issues on the planet far beyond what they were prepared to deal with.

-Creator: J. J. Abrams, based off the work of Gene Roddenberry

-Where to Watch: DVD, BlueRay, 4K, for rent/purchase on Amazon Prime Video, YouTube and iTunes (amongst others), or find it at your local library!

I am absolutely in love with the new Kelvin Timeline series.  This first movie was the start of what I believe to be the true reboot of Star Trek.  The style of the film was unlike anything we had seen previously.  From the sleek sets, the new costumes and the fantastic cast the combination of practical and CGI this is truly a new Enterprise.

While I understand that the Kelvin Timeline threw out any extended universe it also didn’t. This is often a point of contention between myself and others in the fandom. But just like there is so much to explore in Star Trek itself there is no reason that these two timelines, as well as their fans, cannot stand side by side.  This was the time for fans new and old to unite around a beautiful film.

The performances by the main crew are stunning.  As they all had to live up to the incredible character development already done by their predecessors.  The wiggle room they had they all used to the fullest while still honoring their TOS counterparts with beautiful renditions within that framework.

Besides that though the movie is just thoroughly entertaining.   There is action, romance, anger, revenge, sassy characters, internal conflicts, and plenty of science-fiction to entertain even the most avid movie viewer.  Count in the guest star, the beloved Leonard Nimoy, and you have a wonderful two hours of entertainment.

Though I do love this film it is not without its challenges.

For those who are unfamiliar with the characters (though they are introduced organically) a lot of the jokes, moments of personal significance and the differences from their TOS counterparts are lost.  This can cause the film to feel less dimensional and vibrant.

The costuming, like other aspects, are much more refined.   And the lighting and CGI are top notch.  But Abrams did do everything he could practically so there are these wonderful elements of tangible design in the film.

The set, while my favorite of the Enterprise sets, is quite sleek and modern especially when compared with its TOS counterpart.  This is partly due to time frame (2009 compared to the 1970s) and partly due to the vision of the director and the crew.  I can understand how this could be jarring for long time fans….but what bothers me the most is that a lot of these fans cannot get past the fact that this is an entirely different timeline.

They seem to get angry that the extended universe was thrown out (in my opinion it wasn’t).  But Abrams said they specifically chose to do an ALTERNATIVE timeline so it DIDN’T throw out everything that the 50 years of Star Trek (from TV shows to books to movies).

By far I would say this start to the new timeline has been one of my favorite Star Trek reboots in a long time.